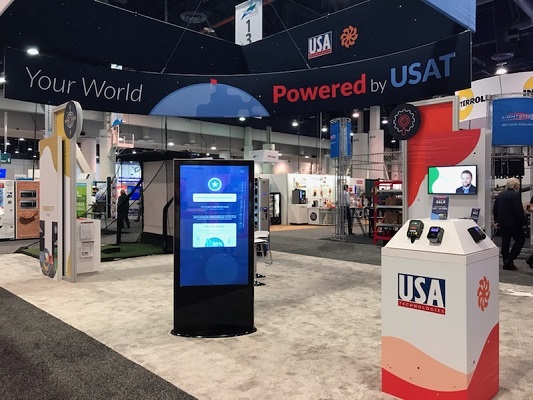 LAS VEGAS–The NAMA Show – Today, USA Technologies (NASDAQ:USAT) (“USAT”), a premier digital payment, consumer engagement and logistics service provider for the self-service retail market, marked the 20th anniversary of the debut of the ePort which was first unveiled at NAMA in 1999, bringing one of the first cashless payment platforms to the self-serve retail industry. With an eye toward USAT’s continued leadership in innovation, USAT branded its booth, “Powering Your Unattended World,” and showcased new technologies, partnerships and research throughout the show.

“Twenty years ago, we ushered in the era of cashless in the vending market with ePort Connect,” said Stephen P. Herbert, CEO of USA Technologies. “Since then, USAT has been at the helm of industry innovation, a change agent powering cashless adoption industry-wide. Early on, we began to recognize the benefits and opportunities possible through cashless technologies. USAT has since grown to support over 15,000 customers and approximately one million connections. We believe we have one of the largest NFC mobile footprints in the US retail market. We were excited to celebrate this incredible accomplishment at NAMA and look forward to continuing to drive innovation and shape the self-serve retail marketplace for decades to come.”

During the show, USAT’s booth focused on the strength of its enterprise platform for unattended retail through its booth design and messaging: bringing consumer engagement and rewards, the benefits of both top-line revenue opportunities through digital payments and the bottom-line margin opportunities through increased efficiencies, logistics and merchandising.

“USA Technologies has been a great partner,” said Karalynn McDermott, Senior Vice President of Market Development at Bunn-O-Matic Corporation. “The support and reliability we receive from USA Technologies, as well as their proven system, allows us to grow and innovate. We look forward to continuing our partnership with the company as the convenience service industry continues to grow.”

“Imperial has been a Seed customer for more than 10 years, and it has completely revolutionized our business,” said Lance Whorton President of Imperial Companies. “Through USAT’s Seed technology, we can now ensure our machines are full, our routes are growing and our products are targeted to the preferences of consumers. This ensures we are bringing a better experience to our clients and consumers while increasing our top line sales which continue to grow year-over-year-over-year.”