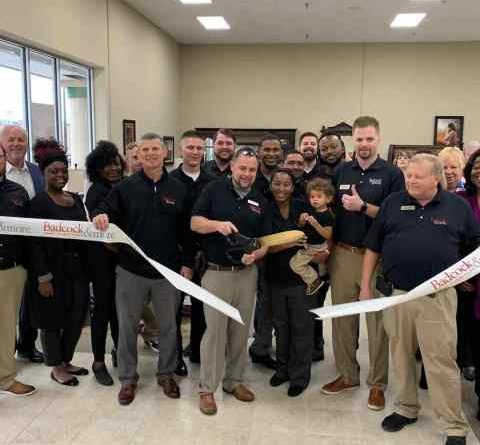 MULBERRY, Fla.–W.S. Badcock Corporation’s namesake retail brand, Badcock Home Furniture &more has a lot to celebrate. In addition to recently being named Retailer of the Year by the Home Furnishings Association and marking its 114th year in business, the beloved home furnishings retailer opened its 350th location on October 2, 2018.

The newly opened store located in Meridian, Mississippi is the sixth location in the state of Mississippi and joins the ranks of 344 other stores in Florida, Georgia, Alabama, North Carolina, South Carolina, Tennessee and Virginia. To commemorate the auspicious achievement, a ribbon cutting with store owner Robert Bennett and members of the corporate executive team took place last week on October 25, 2018.

Although the brand has seen a large amount of progress over its 114-year tenure, the growth in recent years has been nothing less than explosive. In the fiscal year of 2018 alone, the company set a new internal record by opening 16 new stores. According to CEO and President Rob Burnette, “What was really exciting is that 10 of those new stores were individual Dealer stores!” For those not familiar with the model W.S. Badcock Corporation utilizes, Dealer stores are individually owned and operated with the support and guidance of the corporation. Some of the areas of support include accounts receivables, credit and collections services and brand advertising. Recent changes in the way Dealer stores are paid out and a shift of some owner responsibilities back to the corporation has resulted in a level of restored enthusiasm and vigor in the Dealer community and increased interest from potential new owners.

Of course, much of the sustained success and recent growth can be attributed to Badcock’s focus on upholding its “Badcock will treat you right” motto and its continuous appreciation of its customers, many of whom are lifelong fans of the company.

Those in both the Dealer community and the corporate office are incredibly optimistic about what the future may hold for the company. Looking forward, Vice President of Retail Operations, Mitchell Stiles says, “This is an extremely exciting time in our history and one that we will look back on as a defining moment for the organization.”

HomeVestors Asks America to Choose The Ugliest House Of The Year®