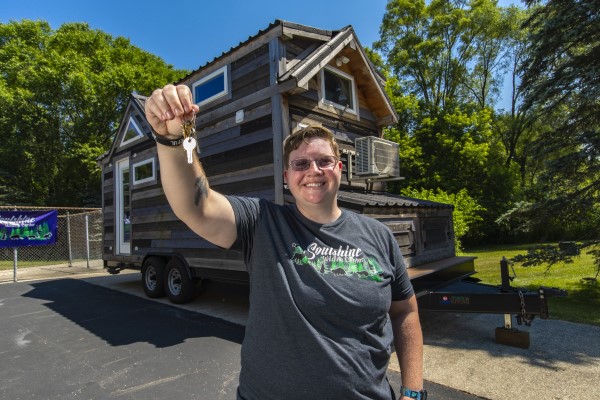 This week, 84 Lumber road tripped to Michigan to give a local military veteran the surprise of a lifetime. For the company’s annual Operation Appreciation campaign, 84 Lumber accepted video entries from military members who could benefit from a tiny house. Tabitha Foster, a retired Army National Guard, was selected as the winner and was presented with the keys to her brand new tiny house in Sparta, Michigan.

When Tabitha retired from the U.S. Army, she suffered from extreme PTSD and a mild traumatic brain injury, but she was driven to find her next career. She discovered a passion for animals and went on to get her Masters in Biology. Tabitha has maintained several volunteer positions, but has been dreaming of moving from Kentucky to Michigan to work at Soulshine Wildlife Center, an animal reservation owned by her friend Amber Covell.

“If I won this house, it would change my whole life,” Tabitha told 84 Lumber in her entry video. “It would make a huge impact, not only on me, but also on the animals that I would be able to help.”

A panel of 84 Lumber associates selected Tabitha based on her compelling story and her plans for using the tiny house. The team worked with Soulshine Wildlife Center to coordinate the surprise. Now that Tabitha has the keys to her new home, she is able to finalize her plans to move and work with animals.

“I won! I can’t believe I won! This changes everything. I had no idea how I was going to move up here to Michigan, if it was even possible. And now, I have this tiny house,” Tabitha said.

This was 84 Lumber’s fifth year in a row putting on its Operation Appreciation campaign. Throughout the rest of the year, however, 84 Lumber always seeks ways to support our country’s military. The company hires and recruits military veterans, it offers a special discount to military members, and it recently launched a partnership with the Fisher House Foundation.

“We are always looking for ways to give back, especially to those who have given so much to our country,” said Amy Smiley, vice president of marketing for 84 Lumber. “Our company President, Maggie Hardy Knox, has always exemplified the importance of giving, and we are very proud to have the means to help individuals in such unique ways. We can’t wait to see Tabitha continue to succeed!”

What first started as a cash-and-carry lumber yard nearly 65 years ago, 84 Lumber is now the nation’s largest privately held building materials supplier with 250 locations across 33 states. The company plans to expand into new markets including Detroit, Boise and more within the next year.

BigRentz Has a Big Heart for Supporting the Community